This is a mechanical sleight of hand, or is it a visual illusion? There is a flight of stairs, and then there isn’t – the steps vanish, flattening to a smooth, level surface. You see it happen, you understand, in an intuitive way, how it works, and still it seems magical.

DPA got to know about a certain firm’s custom-designed office for one of its staff who has a disability. We reached out to them for a chat and to take a look. This was how, one sunny morning, WOHA Architects came to play gracious hosts to us at its premises.

We were showed around the office, which is located in a converted shophouse, by WOHA staff Richard Kuppusamy and Phoebe Tan.

Richard, a wheelchair user, is an architect, while Phoebe is the Information Resource Manager.

It was especially interesting, not to mention illuminating, to see how WOHA had tackled the shophouse’s unique spatial and design challenges to make it wheelchair accessible.

But before venturing there, let’s get to know Richard a bit more.

Richard had worked in the United Kingdom for 16 years before moving back to Singapore to be closer to his family. When he started job hunting upon his return, he found obstacles – literal, concrete ones – in his way. Not only did Richard have to seek an architect firm he would like to work for, it also has to have a door he could actually enter in his wheelchair.

WOHA Architects and Richard, fortunately, found each other and they turned out to be the perfect match. The WOHA management was willing to modify the office to make it accessible. WOHA, aptly enough, served as designer and consultant for the renovations, which were done in collaboration with Richard. The end result is an excellent example of “reasonable accommodation” in the workplace.

Untangling the acronym: About the CRPD
As defined by the The United Nations Convention on the Rights of Persons with Disabilities, ‘reasonable accommodation’ refers to “the necessary and appropriate modification and adjustments not imposing a disproportionate or undue burden, where needed in a particular case, to ensure to persons with disabilities the enjoyment or exercise on an equal basis with others of all human rights and fundamental freedoms.”

The Importance of Being Reasonable..

Let’s see how the concept of “reasonable accommodation” works in practice for Richard. To him, it does not mean that every part of the office has to be made accessible to him. He feels it is enough that most of the office is accessible, especially the areas he needs to access frequently in the course of his work. He also says it “means that there are no barriers which prevent disabled persons from carrying out their work efficiently and also affording them the ability to excel”.

Reasonable accommodation, in other words, is not as overwhelming or as difficult to carry out as we might think. It is about acceptable compromises and balancing the needs of all parties, not about insisting that the needs of the person with disabilities – or any one group – take priority over others’.

An example: At one level of the office, there is a ramp which is a little steeper than technically ideal, but Richard does not mind as he can still use it comfortably. Making it less steep would get in the way of another colleague’s desk and also make it more likely for others to trip over it accidentally.

Richard says that if his fellow colleagues have questions about disability or about how to integrate the employee with disability, these questions should be addressed to the HR department. The HR side should have a policy to answer such queries and address any issues arising from having a staff with disability. It would also be good to have awareness/sensitivity training for the employees before hiring the person with disability.

Being Inclusive – What Does it Mean?

Richard feels employers in Singapore need to make more effort in being inclusive. Small measures can go a long way towards inclusiveness not only in their offices, but in their employment practices.

For example, if the office is not accessible for a candidate who uses a wheelchair, they should consider holding the interview at another venue which is accessible. If they then decide to hire that person, they can then go about making the office accessible.

He notes that a culture of inclusiveness in the workplace helps companies attract and keep employees with disabilities “who are educated and skilled, otherwise they will go overseas if there are no employment opportunities in Singapore.”

Now, let’s take a tour of the renovated, accessible shophouse!

Main entrance: The main door is big enough for a wheelchair user to go through easily. There is also a slight slope from the pavement outside leading to the door. WOHA had levelled off the walkway in the front of its shophouse premises to ensure easy passage through to the office entrance or past it to the adjacent buildings.

Richard notes that in many cases, the walkways outside shophouse buildings are not level, and also tended to be blocked by various structures such as signposts, bollards and fire hydrants. This makes it difficult or impossible for a wheelchair user to navigate freely.

Within and around WOHA’s shophouse office, the floors and rooms are made as accessible as possible.

Now You See It…

Two sets of flex up stairs are installed at WOHA’s office – one at the back entrance and another leading to the meeting room.

Back entrance: As the street level is lower than the entrance to the shophouse, stair access to the building is needed, and so is a lift for the wheelchair. The solution is to have something does both – flex up stairs.

Meeting room: As the shophouse is a listed (ie. protected) property according to the National Heritage Board (NHB), certain structural and aesthetic designs of the original building must be retained. NHB guidelines include the provision that the floors have to be maintained at their original levels up to 8 metres inside the building. This is why there are multiple levels on one floor, which means a set of flex up stairs had to be customised for access to the meeting room.

Let’s have a look at the flex up stairs in action.

The flex up stairs is activated by a button, which converts the stairs to a lift, and which reverts to a set of stairs after a minute. As a safety feature, it is fitted with sensors which detect whether anyone is on the platform. When activated, an alarm sounds to alert people to keep clear. This Building and Construction Authority-approved device, which costs about $40,000 to $50,000, was eligible for an ATF subsidy. (See box story below for more about the ATF.)

Accessibility solutions, Richard adds, should be integrated in a seamless way and not look like an afterthought. This is especially pertinent for a design firm. The flex up stairs and design of WOHA’s office is a good example of how this can be done – in fact, the meeting room is available for architecture groups to study as a model of accessible design. 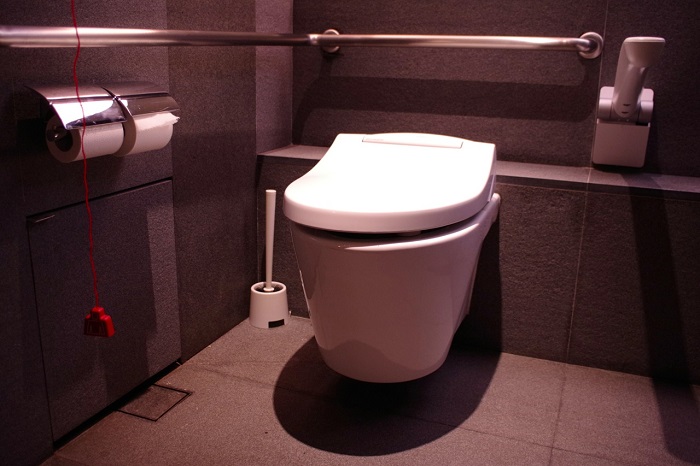 Bathroom: The bathroom/toilet door is of a foldable design which takes up less space than a swing door. The door can be opened both inwards and outwards, yet it works like a regular swing door. This type of door is usually used in corridors and is especially suited to the limited space of a converted shophouse.

Toilet: Richard feels that the design of toilets should conform to British accessibility standards which promote the independent – rather than assisted – use of the facility. This is what WOHA has done for its accessible toilet in its premises.

The current BCA code specifies a sink to be located on the wall next to the toilet, but this poses a problem – it blocks side transfers. (Side transfers from a wheelchair to the toilet is best for most levels of mobility.) The layout in the BCA code, Richard feels, is more conducive to assistants of person with disabilities, rather than for more independent users who do not need help.

Sink: The sink should be situated so that the wheelchair user can wash his hands before touching the wheelchair again, which makes for better hygiene.

The sink has an infrared sensor tap and soap dispenser. The sensor is in the tap end which is more reliably activated compared to other taps with sensors embedded lower down. Other universal design features include: the dip in the front of the sink for the person in a wheelchair to reach the tap more easily; and the ample knee space clearance under the sink.

In Case Of Emergency

An evacuation plan that specifies procedures to bring wheelchair users or those with limited mobility out of the building safely is necessary in cases of fire or other emergencies. WOHA had gotten in touch with the Singapore Civil Defence Force (SCDF) about the evacuation guidelines and procedures for shophouses.

Although the lift is cleared to be operated in case of a fire, firemen would need exclusive use of it. So another method to get Richard down the stairs and out of the building during emergencies is needed – via a evacuation chair.

Richard had undertaken some research on the efficacy and suitability of evacuation chairs in the market, as part of a previous research project as an access consultant.

He found that widely used evacuation chairs do not adhere to any safety standards, and may be uncomfortable or even hazardous to the user. That is, although these non-certified chairs may help one survive a fire, the user may also end up with other injuries and further disabilities.

Another problem is that most such chairs are not designed to be used on a level floor. But as wheelchair users would have to abandon their wheelchairs in the building they are evacuating and use evacuation chairs instead, such devices need to be able to serve as a temporary wheelchair once they have exited the building and before a replacement can be found.

Although evacuation chairs can be operated easily by people of average strength and build, the operators need to be trained to use them because of the limited space it would be used in and safety concerns.

To use an evacuation chair, the person is strapped into it. On a level floor, the user will be in a sitting position. When descending the stairs, the user is then in an upright position, but not leaning forward as it would be disconcerting to him.

The chair, which WOHA specially imported from Canada, is designed to descend the steps using gravity and the body weight of the person in the chair. It will also automatically stop mid-step if the person pushing it lets go of the lever – a useful safety feature in high-rise buildings where the staircases may be jammed during an evacuation and the human traffic slow moving.

Another interesting fact: Evacuation chairs for basement offices are available too. These are motorised, enabling the ascent of the chairs.

DPA extends our warmest thanks to Richard and Phoebe for their time, company and sharing!